Mr. McCloskey is the Chairperson of the Litigation Department, and a Member of the Firm’s Management Committee. His practice focuses on civil litigation including concentrations in construction litigation, toxic torts, premises liability, transportation law, commercial litigation and insurance coverage. He has tried many cases to verdict, and has extensive experience in both State and Federal courts of Maryland and the District of Columbia.

He is a member of the Steering Committee of the American Law Firm Association Construction Law Committee. He has taught numerous courses on legal research, analysis, and writing. He has served as a Maryland State Coordinator for iCivics, a free web-based education project designed to teach student civics.

Mr. McCloskey achieved an A/V® rating from Martindale Hubbell®, the highest possible peer review rating for ethics and legal ability. He has been included among Maryland’s Super Lawyers in the defense of civil litigation matters. 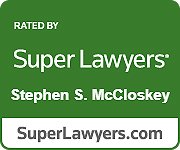 What Is the Reach of the AIA General Conditions’ Consequential Damages Waiver?