Richard’s practice generally focuses on civil defense litigation in the areas of commercial disputes, insurance defense, products liability, toxic torts, premises liability, and business litigation. He also counsels companies on regulatory compliance, as well as assisting in the drafting and negotiation of contracts and other corporate documents. Prior to joining the firm as an associate, Richard was a Summer Associate and Law Clerk with the firm.

While in law school at the University of Maryland, Richard was a captain of the National Trial Team and lead counsel in three national tournaments. Additionally, he participated in the University of Maryland School of Law Clinical Program for two years where he was a practicing student attorney in both the Landlord-Tenant Clinic and HIV/AIDS Clinic. Richard also worked as a law clerk for the Frederick County State’s Attorney’s Office. Richard graduated from the University of Maryland School of Law magna cum laude, receiving the Public Service Award in recognition of his service to the community, as well as being inducted into the prestigious Order of the Barristers and Order of the Coif. 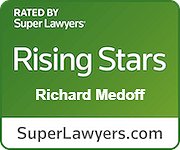